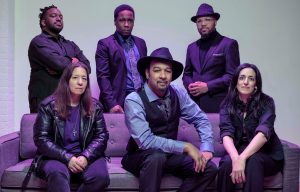 Purple Luscious Love formed in the glow of a Prince tribute night in 2009, after a raucous crowd response inspired the founding members to dive deeper into the purple music catalog. A few years later, PLL hosted a Purple Rain sing-along to a packed movie theater–dialogue and all! After Prince’s untimely death in 2016, PLL began the work of bringing his music to life in the form of a yearly tribute in April. After several successful shows, PLL began to explore other artists who were directly influenced by His Royal Badness in order to add depth, flavor and variety to each set. Artists such as Janet Jackson, Cameo, Thomas Dolby, Duran Duran, and other electric funk and R&B songs were added to the repertoire, with the promise of fresh material at every show.