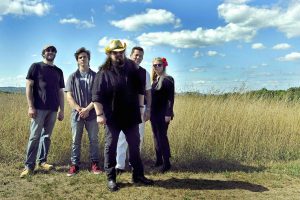 Black Eyed Sally’s is thrilled to present the return of internationally acclaimed singer/songwriter and pianist Grayson Hugh and his band GRAYSON HUGH & THE MOON HAWKS. Hugh’s piano playing has been called “a veritable cyclone of soul” and his voice has been compared to Sam Cooke and Otis Redding. Hugh’s band consists of 19 year-old blues guitar phenom Bobby Paltauf (who has also performed with blues legend Buddy Guy), drummer Tyger MacNeal (Average White Band, Johnny Winter, Jose Feliciano), bassist Anthony Candullo (Popa Chubby, Yonrico Scott of the Derek Trucks Band, Duke Robillard) and the ever-talented vocalist Polly Messer (formerly with the popular swing band Eight To The Bar). Hugh’s music and high energy shows have earned praise from Soul, Blues and Roots Rock music critics and musicians alike ever since he burst onto the scene in 1988 with his RCA global mega hits “Talk It Over”, “Bring It All Back”, and “How ‘Bout Us”. Don’t miss the chance to see this blue-eyed soul legend up close and personal with his hard-grooving band as they perform songs from his albums “Blind To Reason, “Road To Freedom”, “An American Record” and “Back To The Soul”, as well as his hits from radio and Oscar-winning films “Thelma and Louise” and “Fried Green Tomatoes”!